I want my hat back: a knitter’s tale of love and loss

It’s been a chilly January in the UK, and on colder days I’ve felt a nagging sense of loss for my alpaca handknit hat.

I made it in January 2016.  It was the Chester Basin hat, designed by Fiona Alice.  I saw a sample at the launch of her pattern collection, Take Heart, and I fell in love with the stitch pattern and the way it felt.  I bought the yarn that very evening to knit my own: two skeins of soft, tweedy alpaca yarn spun by The Border Mill, in a perfect deep pink and pale grey. 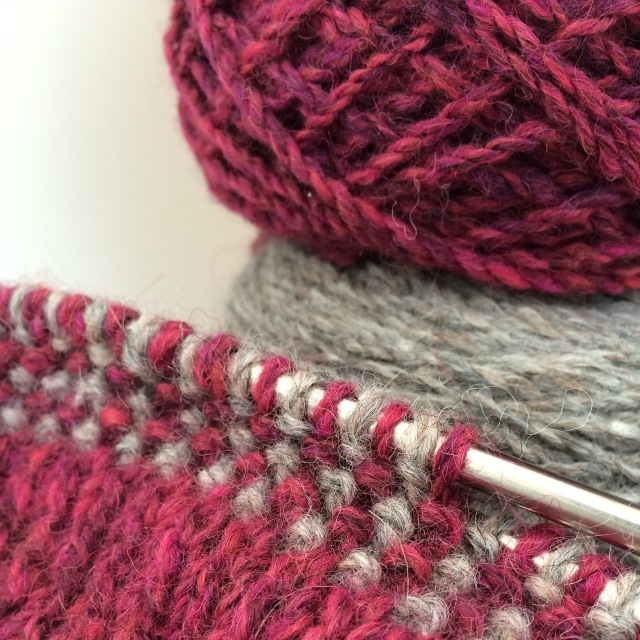 Here’s a picture of the hat while I was making it.

The pattern has a folded brim to keep your ears warm, and the slipped stitch pattern of the lofty alpaca fabric created a wonderful hat for the coldest of days.  I wore it with a glee bordering on smugness, and felt a deep satisfaction every time I pulled it on.  That is the joy of making something yourself.  It was completely and utterly fit for purpose.  I had adapted the largest size to fit my enormous head.  I had chosen colours I love.  Wearing that hat was one of life’s disproportionately great pleasures, considering it was just a hat.

Then one day, just after Christmas, I came home late from work.  I stepped off the train onto the dark platform.  I reached inside my bag as the train pulled away, only to find that my hat was not there.  It must have been on my lap, and fallen as I got up from my seat.

There is probably a German compound noun for the feeling of having just realised that you’ve left a well-loved hat on a train. If not, then there should be a word to describe that particular combination of panic and loss, with a heavy helping of reproachfulness for having not realised a few seconds earlier, and dashes of both hope that you might find it and irritation that your ears are cold.

I’m sure that the feeling was intensified by the fact that I’d made the hat myself.  I think that the loss of something handmade is more deeply felt, because of the time and care which has been put into the fabrication of something which is so fit for purpose.  It becomes more than just a thing.  I felt that I’d let that hat down, to lose it.  Yet it was still just a hat, and as easily lost as any other.

I worked out that the train would turn around and come back through my station half an hour later.  I searched that return train, but the hat was not there.  It hadn’t been handed in at lost property either.

I’m a huge fan of Jon Klassen’s trilogy of hat books for children.  I’ve basically spent the last few weeks looking for the mischievous rabbit from his first hat book, I Want My Hat Back.  That rabbit has my hat.  I’m sure of it.

I have another hat and I’m sure I will eventually get over this, but for now, I find myself looking round the train carriage from time to time, to see if anyone on that route is wearing my hat.  (I have no idea what I’d do if I did see someone wearing it though, and slightly dread the awkwardness of the conversation that might ensue!)  If I can’t have it, I hope it’s being loved and keeping someone warm somewhere.

I still want my hat back.

This entry was posted in knitting. Bookmark the permalink.

2 Responses to I want my hat back: a knitter’s tale of love and loss